Winnipeg, MB: The Abbotsford Canucks (15-13-3-1) fought valiantly but fell to the Manitoba Moose (23-11-2-1), losing 5-3 on Sunday afternoon in Winnipeg. Arturs Silovs took the loss for the Canucks and Arvid Holm earned the victory for the home side.

The Moose struck first this afternoon. Nicholas Jones found the back of the net, beating Arturs Silovs glove side at the 9:08 mark of the opening frame. Haralds Egle scored 41 seconds later to make it a 2-0 lead for Manitoba. Dean Stewart and Greg Meireles had the helpers on the goal.

Manitoba dominated the pace of play during the first 20 minutes, outshooting the Canucks 18-6 and outscoring Abbotsford 2-0.

Nicholas Jones scored his second goal of the contest 32 seconds into the second period. Simon Lundmark registered the assist on the play as Manitoba took a commanding 3-0 lead. Jeff Malott made it a 4-0 game at the 4:28 mark of the second period. Egle and Meireles had the assists on the play. This was the final shot Silovs faced as he was replaced by Michael DiPietro following Manitoba’s fourth goal of the game.

The Abby Canucks cracked the scoresheet at the 6:40 mark of the second period when Sheldon Dries poked it past Holm. Madison Bowey and Sheldon Rempal had the assists on the play. The Canucks cut the Manitoba lead in half just before the buzzer sounded on the second period when Rempal wristed a shot past Holm on the powerplay. Nic Petan and Phil Di Giuseppe had the helpers.

Jeff Malott extended the Moose lead to three goals once again at the 5:11 mark of the third period. It was Malott’s second goal of the game and was assisted by Todd Burgess and Dean Stewart.

The Canucks’ powerplay was impoissible to contain today and they netted their second goal of the afternoon at the 7:27 mark of the third period. Rempal tickled the twine for the second time, making it a 5-3 game. Dries and Bowey had the assists on the play.

Despite feverish pressure being applied late with the empty net, Abby was unable to break through and lost 5-3 today in Winnipeg. 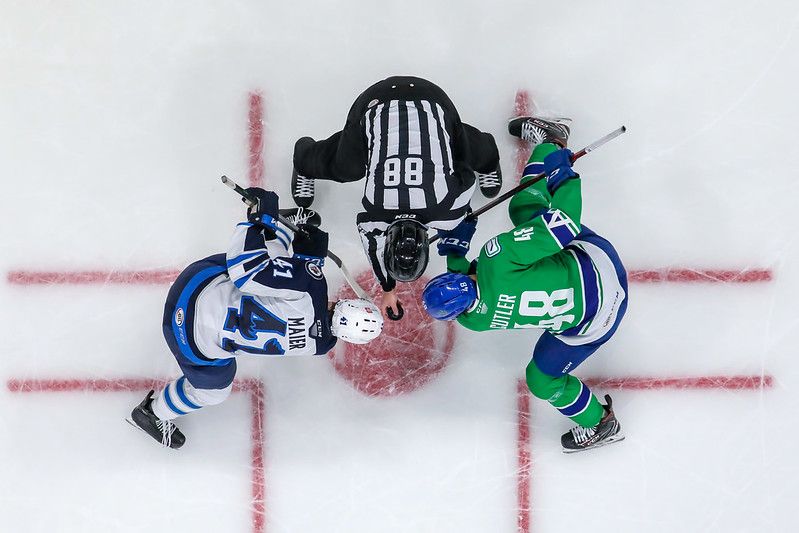 An overhead shot of a faceoff from today's game in Winnipeg.

The Abbotsford Canucks (15-13-3-1) will head home to host the Stockton Heat on Thursday, Feb. 3. Puck drop is scheduled for 7pm from Abbotsford Centre. The Canucks are currently in sixth place in the Pacific Division with 34 points. Stockton sits in first place in the Pacific with 52 points. February 3rd will be the Abby Canucks Lunar New year game, so fans can expect some special festivities to celebrate the holiday.