The Abbotsford Canucks (15-15-3-1) lost 2-1 against the Stockton Heat (26-7-3-1) on Friday night at Abbotsford Centre. The Canucks rallied late but were unable to complete the comeback. Dustin Wolf was brilliant in net for the Heat, stopping 36 of the 37 shots he faced in the win. Michael DiPietro was saddled with the loss for the Canucks.

The Heat opened the scoring exactly halfway through the first period, as a Jakob Pelletier’s shot trickled past DiPietro to give Stockton a 1-0 lead. The marker was unassisted. Matthew Phillips doubled the Heat lead at the 18:36 mark of the first period when he wired the puck past Mikey up high while on a 5-on-3 powerplay. Glenn Gawdin and Johannes Kinnvall combined with the assists on the play.

Despite outshooting the Heat 14-8 in the opening 20 minutes and 14-5 in the second period, the Canucks trailed 2-0 through the first two periods.

The Canucks finally broke through with 2:52 remaining in regulation. Sheldon Rempal wristed a shot over Wolf’s blocker to cut the Heat lead in half. The goal came during some 6-on-4 time as Abby had the man advantage and had pulled DiPietro. Jack Rathbone and Sheldon Dries had the helper on the goal.

That was as close as Abbotsford got tonight, as they couldn’t beat Wolf in the dying moments. Stockton swept both games against the Canucks this week, but tonight’s game was a great effort from the home side.

"I was really happy with our battle, our compete level. We raced after pucks and worked harder today trying to get an advantage. I thought the boys executed the game plan really well. We had a bit of a slow start, but rebounded in the last two periods." - Head Coach, Trent Cull.

"As far as the effort on the ice tonight, if we play the way we did tonight every game, we are going to win a lot of hockey games. We just have to be consistent with that and that's our focus moving forward." - Defenceman, Ashton Sautner.

" I thought Mikey (DiPietro) played well. He gave us a chance to win. We were under siege there early and he held us in the game. I liked Mickey's effort tonight." - Head Coach, Trent Cull. 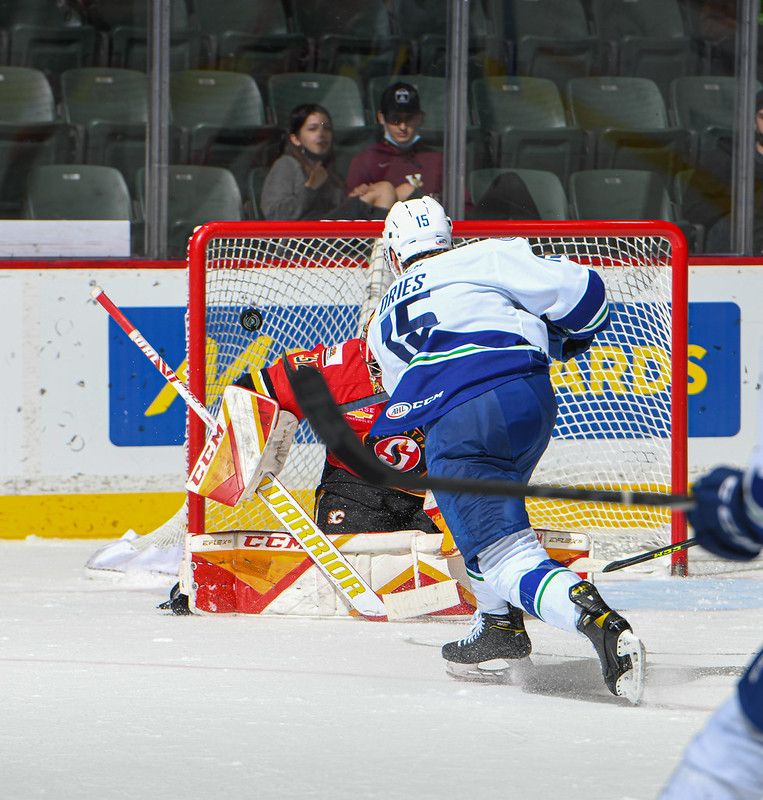 Sheldon Dries tries to beat Dustin Wolf blocker side with a wrist shot in the second period of tonight's contest.

The Abbotsford Canucks (15-15-3-1) home stand continues as they welcome the Tucson Roadrunners (13-19-2-1) for a pair of games beginning on Monday night. Puck drop is scheduled for 7pm on Monday at Abbotsford Centre. The Canucks currently sit sixth in the Pacific Division with 34 points. The Roadrunners have 29 points, good for eighth place in the Pacific.