Abbotsford, BC - The Abbotsford Canucks (17-15-3-1) stayed hot on Wednesday night against the Tucson Roadrunners (14-21-2-1), dominating en route to earning a 5-0 victory. Spencer Martin recorded his second shutout of the season for the Canucks and Josef Korenar took the loss for the visiting Roadrunners.

The Abby Canucks started fast for the second night in a row against the Roadrunners. The Canucks set a new franchise record with four goals in the opening 20 minutes. Madison Bowey got the scoring started by backhanding home a goal after forcing a turnover near the far boards. Bowey lifted the puck over the glove of Korenar to give the Canucks a 1-0 lead at the 7:21 mark.

Jarid Lukosevicious doubled the Canucks margin when he lit the lamp at the 12:02 mark following a perfect feed from Sheldon Dries. Adam Brubacher and Dries combined for the helpers on the play. Madison Bowey notched his second marker of the second period 64 seconds later when he wristed a shot that found twine. Justin Bailey and John Stevens had the assists.

The Canucks scored their fourth goal of the opening frame when Di Giuseppe buried a Jack Rathbone rebound with less than four minutes remaining in the period. Sheldon Rempal and Rathbone registered the assists on the powerplay goal.

Abbotsford didn’t let up in the second period, scoring their fifth goal of the contest at the 3:13 mark. John Stevens found the back of the net to make it five unanswered goals for the Canucks. Alex Kannok Leipert and Danila Klimovich had the helpers. The goal chased Korenar from the game, as former Vancouver Giant David Tendeck replaced the Roadrunner netminder in net.

When combined with Monday’s eight goals, the Abby Canucks netted a total of 13 goals in just over four periods of play. 5-0 is how this game ended as the Canucks dominated in every facet of the game on Wednesday night.

"It's been nice for our powerplay to have the same group get a chance to play together for an extended period of time. I think they have been doing a good job lately. They have been dangerous for us for most of the year, but I feel like they have hit another level lately." - Head Coach, Trent Cull on the success of the Canucks' powerplay.

"I get excited. I'm a pretty competitive guy and I love winning. My emotions change a lot when I'm on the ice as compared to when I am off the ice. But that's what I am, I'm a gamer and I love it." - Defenceman, Madison Bowey on showing his emotions after scoring a pair of goals tonight.

"We scored a bunch of goals in the beginning of the game, so I felt really comfortable in net with the way we were playing. We limited their chances, our penalty kill was outstanding tonight. They made me feel real comfortable back there." - Goaltender, Spencer Martin on his shutout win. 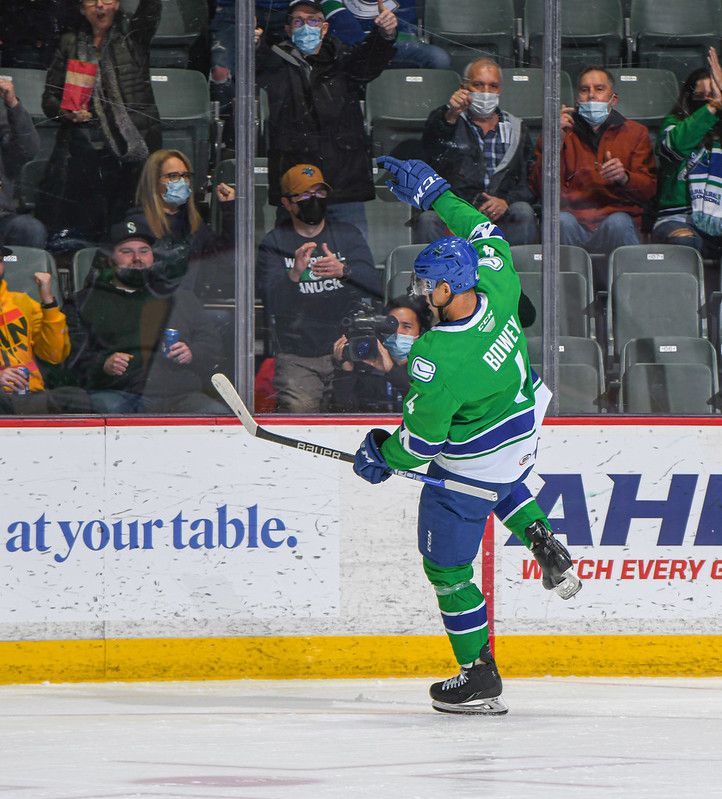 The Abbotsford Canucks (17-15-3-1) will return to action on Friday night against the Manitoba Moose (25-12-2-1). Puck drop is scheduled for 7pm from Abbotsford Centre. In honour of the Olympic Winter Games, fans are encouraged to wear red to the game. The Canucks enter play in sixth spot in the Pacific with 38 points and Manitoba is currently second in the Central with 53 points.