Ontario, CA: The Abbotsford Canucks won in dramatic fashion on Monday afternoon, beating the Ontario Reign in a shootout to win by the final score of 2-1. Both netminders played outstanding today, but Arturs Silovs earned the win for the Canucks and Matthew Villalta was saddled with the defeat.

There was great pace of play for both clubs early on today which resulted in quality scoring chances for the Canucks and the Reign. Abbotsford killed off two penalties thanks to an outstanding period from their netminder, Arturs Silovs. The Canucks lead in shots on net, 11-10 after the opening 20 minutes but neither team was able to find the back of the net.

Ontario took the lead 93 seconds into the second period thanks to Jordan Spence. Cameron Gaunce and Tyler Madden had the helpers on the play to give Ontario a 1-0 lead.

The Canucks led in shots, 24-17 through the first two periods but were unable to beat Reign goalie, Matthew Villalta. The Reign took their one-goal advantage into the third period.

Sheldon Dries found twine with 12:36 remaining in the third to tie the game for the Canucks. Nic Petan found Dries in the slot and he wristed it past Villalta to make it a 1-1 game.

Despite numerous chances for both teams late, this game went into extra time. The Canucks took a penalty in overtime but managed to kill it off thanks to what felt like a dozen blocks by Noah Juulsen and some remarkable work in net by Silovs. 65 minutes was not enough time to decide this game and it went into a shootout.

Phil Di Giuseppe started off the festivities with a goal in the opening round of the shootout, beating Villalta five-hole for the marker. Silovs continued his strong play in net, blanking the Reign in their three attempts (thanks to an assist by the post) to secure the win for the Canucks.

“I really liked how we played. It was a tight checking game and it was really good for our guys to withstand the adversity in the second period. We came out with a ton of jump in the third period, Sheldon’s goal was obviously huge and we killed some big penalties.” – Trent Cull, Abbotsford Head Coach.

“Ontario has some high end skill players, so I was very impressed with our penalty kill. The old saying is that your goalie is your best penalty killer and that was true today. Arty did a great job out there. The players did a great job killing some key penalties in the win.” – Trent Cull, Abbotsford Head Coach. 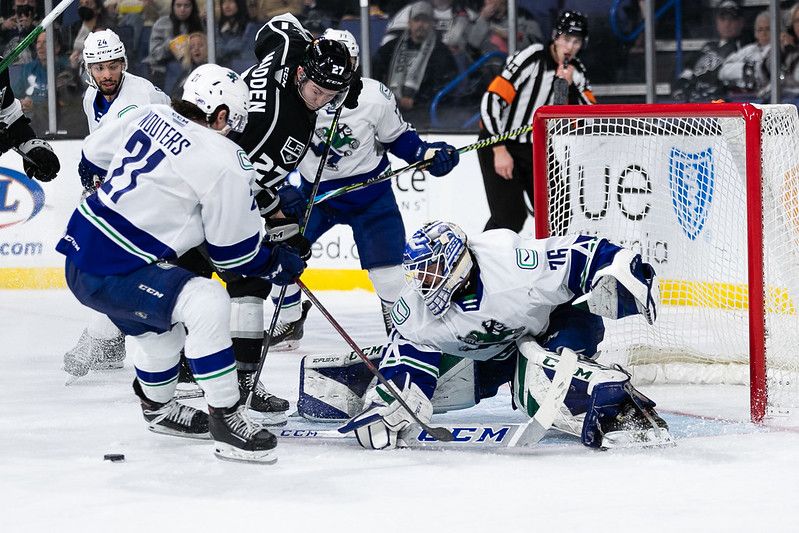 Arturs Silovs makes one of his 22 saves against the Reign.

The Canucks (12-12-3-1) will head home to Abbotsford to welcome the San Diego Gulls (11-13-2-1) to town for the opener of a quick weekend series on January 22. Puck drop is scheduled for 7pm on Saturday night at Abbotsford Centre. The Canucks are sixth in the Pacific Division with 28 points. San Diego is currently in eighth place in the Pacific with 24 points.