Nic Petan opened the scoring while on the powerplay at the 10:05 mark of the first period. The goal came on the second shot of the contest for the Canucks. Sheldon Rempal and Jack Rathbone assisted on the play.

The Canucks did not have the lead for long however, as the Barracuda stormed back to tie the game 30 seconds later at the 10:35 mark in the first period. Sasha Chmelevski got the tying goal for the away side, as Scott Reedy and Jake McGrew had the helpers.

Jarid Lukosevicius gave the Abby Canucks a 2-1 lead with less than three minutes to play in the first period. Tristen Nielsen and Danila Klimovich set the goal up with a pair of pretty passes.

Following a scoreless second period, Ryan Merkley tied the game for the San Jose Barracuda at the 1:23 mark of the final frame. Reedy and Nick Cicek assisted on the play.

Abbotsford’s fabourite son, Noah Juulsen, sealed the victory for the Canucks tonight when he found the back of the net at the 14:52 mark of the third period. John Stevens and Vincent Arseneau collected assists on the play.

Sheldon Dries hit the empty net to make it a 5-2 game and that’s how this one ended. The Abby Canucks got back in the win column thanks to a strong overall effort in all three phases.

“He’s an intense, gritty defenceman. I love seeing those guys getting rewarded, it’s like a lineman getting a touchdown.” – Head Coach, Trent Cull on Noah Juulsen scoring his first goal of the season.

“Our game last night wasn’t how we wanted to play. Coming into today, we know we had to play a lot better. And tonight we accomplished that.” – Noah Juulsen on how the Canucks bounced back following last night’s 6-4 defeat.

“We’re just moving the puck. Jeff Ulmer is doing a great job finding new plays that create openings for us. All 10 guys on both units are executing. It’s going good right now, we just have to keep it going.” – Sheldon Dries on the lethal Canucks’ powerplay as of late. 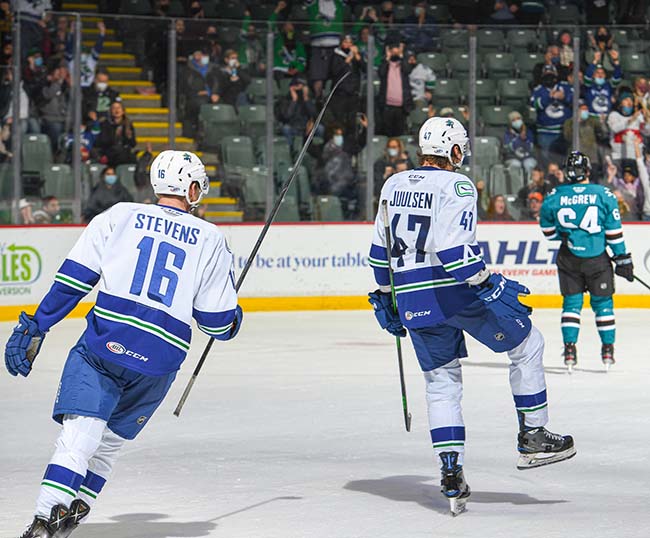 Next up on the docket for the Abbotsford Canucks (7-7-2-1) will be another date with these same San Jose Barracuda (6-9-1-0) on Saturday, December 12th. The two teams may be the same but the location flips, as the Canucks will travel south to San Jose. Puck drop is scheduled for 1:15 pm from the SAP Center at San Jose. The Canucks will enter play in eighth place in the Pacific Divison with 17 points and San Jose sits ninth in the division with 13 points.