The Abbotsford Canucks (19-15-3-1) continue to dominate at home in their green threads, winning 5-2 against the Manitoba Moose (25-14-2-1) on Saturday. The victory was the fourth consecutive for Abbotsford, with all four coming on home ice. Michael DiPietro was victorious in net and Arvid Holm was saddled with the loss for the visiting Moose.

Stevens doubled the Canucks’ lead at the 6:53 mark of the first period. The Northeastern alum was stationed right in front of the Manitoba net and hammered home a Devante Stephens rebound to make it 2-0 for Abbotsford. Chase Wouters combined with Stephens to assist on the goal.

The Canucks were not done there, as they added to their lead in the early stages of the second period. Chase Wouters broke in on a two-on-one with Jarid Lukosevicius and Wouters wristed a shot past Holm to give Abby a 3-0 lead. John Stevens and Lukosevicius had the assists on the play.

Matt Alfaro got the Moose back in the game, scoring at the 9:06 mark in the second period to make it a 3-1 game. Jimmy Oligny and Cole Maier had the assists on the goal.

The glimmer of hope did not last long however, as the Canucks put the hammer down at the 16:06 mark of the second period. John Stevens scored his second goal of the game to give Abbotsford a 4-1 lead. Jack Rathbone and Madison Bowey had the assists.

After the first 40 minutes of play, the Canucks held a commanding 4-1 advantage. Manitoba was not going to go quickly into the night however, and they cut the lead in half just over three minutes into the final frame. Mikey Eyssimont found the back of the net on the powerplay to make it a 4-2 contest.

Phil Di Giuseppe iced the game with an empty net goal, extending the Canucks lead to 5-2. That’s how this game ended, as Abbotsford was clearly the better team tonight.

“That line is like my old faithful. Chase Wouters is doing really well for a young hockey player and John Stevens is one of my go-to guys. I really like Jarid Lukosevicius, he has played up and down the lineup and he has been really good for us. Great job tonight by those three.” – Head Coach, Trent Cull.

“I’ve had a couple two-on-ones this season and I have tried to force a pass. I looked over tonight and their d-man did a good job taking the pass away, so I picked my spot and it ended up going in.” – Forward, Chase Wouters on his second period goal.

“We tried to keep the game pretty simple by making little plays and reading off each other. We were moving pucks north and getting the right bounces. We were fortunate enough to put a couple in.” Forward, John Stevens. 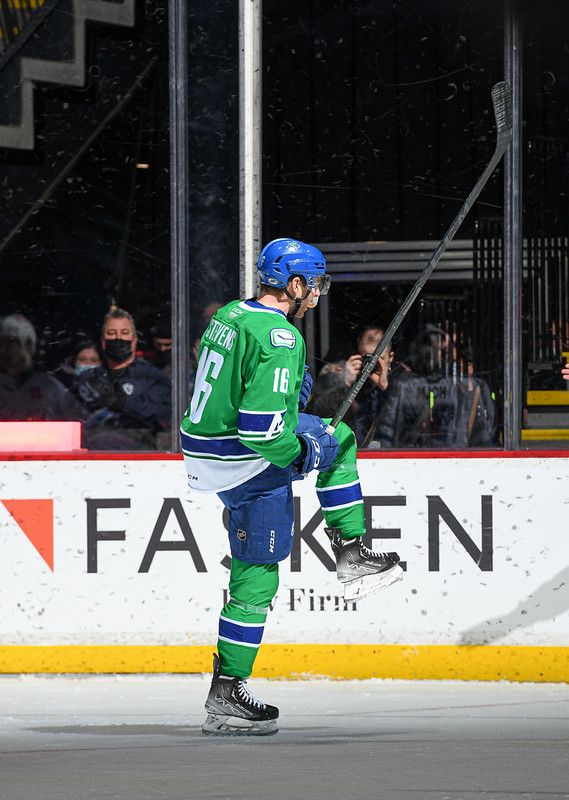 John Stevens celebrates scoring one of his two goals for the Abby Canucks.

The Abbotsford Canucks (19-15-3-1) will head south to take on the Bakersfield Condors (19-10-4-3) on Wednesday night. Puck drop is scheduled for 6:30pm from Bakersfield. The Canucks enter play in sixth place in the Pacific Division with 42 points. The Condors currently sit third in the Pacific with 45 points.