The Stockton Heat (25-7-3-1) burned the Abbotsford Canucks (15-14-3-1) on Thursday night at Abbotsford Centre, winning 7-3 in the series lid lifter. Spencer Martin took the loss in net for the Abby Canucks and Adam Werner collected the victory for the visiting Heat.

The Heat got off to a hot start, scoring the opening goal of the game at the 2:51 mark of the first period. It took just three shots for Stockton to take the lead, as Connor Mackey scored on a wrist shot that had eyes from the blue line. Alex Gallant and Emilio Pettersen had the helpers for the Heat.

Sheldon Rempal tied the game at the 11:14 mark of the second period following a breakaway goal that saw the Canucks’ forward put a sweet move on Adam Werner, beating the Heat tendy glove side. Matt Murphy had a beautiful bank pass from the defensive end that sprung Rempal.

Luke Phillip answered right back for the Heat, scoring to give Stockton the lead less than 40 seconds later. Walker Duehr and Justin Kirkland had the assists on the play.

The Canucks fought back to tie the game at two goals apiece at the 16:28 mark of the opening frame thanks to Will Lockwood. The former Michigan Wolverine punched home the equalizer while Sheldon Rempal and Nic Petan had the assists.

The Heat once again took the lead in the second period, scoring at the 6:52 mark to take a 3-2 lead. Luke Philip scored his second goal of the game to give Stockton the lead. Philip took advantage of some sloppy play by the Canucks in the defensive zone while on the powerplay. Walker Duhr had the assist on the shorthanded goal.

Stockton doubled their lead at the 4:11 mark of the final period when Jakob Pelletier found the back of the net while on the powerplay. Martin Pospisil and Glenn Gawdin had the assists as the Heat took a 4-2 lead.

Matthew Phillips extended the Stockton lead to 5-2 when he beat Spencer Martin at the 4:50 mark of the third period. Pelletier and Kinnvall combined for the assists on the powerplay goal for the Heat.

Yushiroh Hirano trimmed the Heat lead to two goals when he snapped a shot past Werner to make it a 5-3 game. Hirano’s goal came on the man advantage with Justin Bailey and Madison Bowey picking up the assists on the play.

Matthew Phillips added a pair of empty netters late to ice the Canucks comeback attempt, as Stockton won 7-3 this evening at Abby Centre.

“The Heat are a good team. We got into some penalty trouble at the start of the third, not the smartest penalties. We came out of the first 2-2 but then they got a couple powerplay goals to start the third. That kind of turned the tide.” – Trent Cull, Head Coach.

“We didn’t play up to our potential tonight and we just have to come back stronger tomorrow. It’s frustrating. We just have to keep going and we all have to be better, including myself.” Nic Petan, Forward.

“It took us a little bit to get up to speed. We still have some guys who haven’t played a lot of hockey lately. Some guys were a little bit rusty, but once we knocked the rust off, I thought we caught up to speed. The shorthanded goal really hurt us. But I think our mind set is right in terms of what we wanted to do 5-on-5. We just need to do a better job of executing.” – Trent Cull, Head Coach. 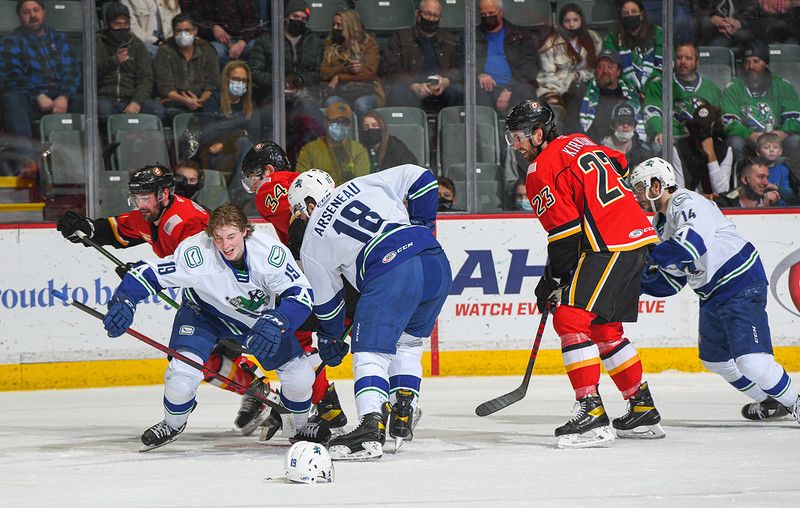 Carson Focht loses his lid but continues to grind as the Abby Canucks attempt to capitalize following a face off win.

The Abbotsford Canucks (15-14-3-1) will be out for revenge tomorrow night as they host the Stockton Heat (25-7-3-1) in the series finale. Puck drop is scheduled for 7pm on Friday night at Abbotsford Centre. The Canucks will enter play sixth in the Pacific Division with 34 points and Stockton is in the catbird seat in the Pacific with 54 points.