The Abbotsford Canucks (15-12-3-1) bested the Manitoba Moose (22-11-2-1) this afternoon in the first ever meeting between the two franchises. Abby won 4-3 in Winnipeg, extending their winning streak to four games. Michael DiPietro earned the victory for the Canucks and Avid Holm was saddled with the loss for the Moose.

The Abbotsford Canucks jumped out to an early lead, scoring on their third shot of the game this afternoon in Winnipeg. Vincent Arseneau hammered home a one-timer at the 6:07 mark of the first period. Will Lockwood set up the goal by forcing a turnover on the forecheck and finding a streaking Arseneau.

Sheldon Dries doubled the Abby lead at the 14:11 mark of the first period when he pounced on a juicy rebound following a Devante Stephens point shot. Dries is always in the right place at the right time, and today was no different. Stephens and Phil Di Giuseppe combined on the helpers for Abbotsford. The Canucks held a 2-0 lead through the opening 20 minutes.

Greg Meireles cut the Abby lead in half at the 5:25 mark of the second period when he slipped a puck past DiPietro. Jeff Malott and Todd Burgess had the assists on the play. Marlott knotted the game at two six minutes later. Meireles had the assist on the tying goal.

Sheldon Rempal wired a one-timer into the back of the net on the powerplay. The rocket shot beat Holm glove side and nearly broke through the twine. Dries set up the goal with a beautiful cross ice feed. Di Giuseppe also recorded an assist on the go-ahead goal.

The Moose stormed back to tie the game in the final frame. Simon Lundmark scored at the 4:56 mark of the third period. Thomas Caron and Matt Alfaro had the assists on the goal.

Sheldon Rempal was a man possessed today and could not be stopped during the final 25 minutes. The 26-year-old winger tickled the twine for the second time today following a great pass from Nic Petan. The goal gave Abbotsford a 4-3 lead and ultimately proved to be the game winner.

"It's special to get to 100 points in the AHL. This isn't an easy league to play in and getting to 100 points in my career is something I'm proud of." - Sheldon Rempal on reaching 100 career AHL points.

"I had no idea that was my 50th assist until right now, but that feels great. It's an honour to play in this league and it feels awesome to hit a milestone like that." - Sheldon Dries on getting his 50th career assist.

"We were snapping the puck around pretty good today. It all started with a good day of practice yesterday and getting back together with Phil (Di Giuseppe) and Sheldon (Dries). It felt great to reunite out there today on the powerplay and to get some positive results." - Sheldon Rempal on the success of the Abby powerplay today. 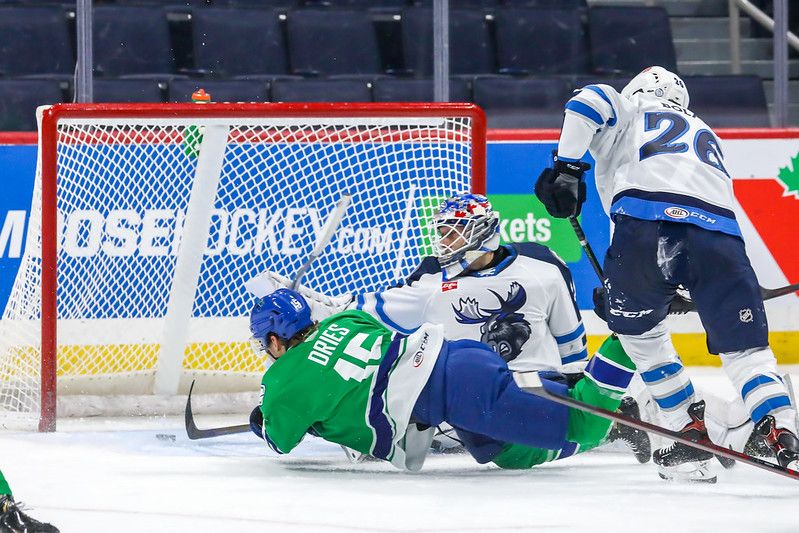 Sheldon Dries pushes the puck past Holm as he falls to the ice during his first period goal.

The Abbotsford Canucks (15-12-3-1) will hit the reset button against the Manitoba Moose (22-11-2-1), as both squads will square off once again on Sunday afternoon. Puck drop is scheduled for 12pm from the Canada Life Centre in Winnipeg, MB. With the win today, Abbotsford sits sixth in the Pacific Division with 34 points. The Moose enter play second in the Central Division with 47 points.