San Diego, CA - The Abbotsford Canucks (9-8-2-1) put on a dominant display of hockey on Wednesday night, shutting out the Gulls (9-10-1-0) 4-0 in San Diego. Everything seemed to be working for the Canucks tonight, as they were clearly the better team in all three phases. Spencer Martin picked up his fourth win and first shutout of the season in net for the visiting Canucks.

Different Sheldon but same result was the theme of the Canucks’ second goal of the game. Sheldon Dries scored his AHL leading 13th goal at the 13:11 mark of the first period. The goal came with the man advantage. Danila Klimovich registered the helper after streaking down the right side, making a sweet move on a Gulls' defender, and firing the puck on net to create a juicy rebound for Dries.

The Canucks dominated the pace of the play in the opening frame. They outshot the Gulls 12-7 and outscored them 2-0 during the first 20 minutes.

Klimovich added to his point total in the second period by scoring his third goal of the season at the 5:58 mark. Vincent Arseneau’s strength on the forecheck led to the goal as he destroyed Greg Pateryn as he was heading up the ice from behind the net. The puck shook loose and landed right on the stick of Klimovich.

Rempal found the back of the net once again in the final frame, extending the Canucks lead to 4-0 at the 15:01 mark. Will Lockwood and Cameron Schilling recorded the assists on the insurance goal.

Spencer Martin was phenomenal between the pipes for the Abby Canucks, recording his first shutout in green and blue. Martin set aside all 23 of the shots he faced and was a steadying force between the pipes. He was calm, cool, and collected as the Canucks cruised to a 4-0 victory.

"Danila made some strong moves at the o-zone blue line and played some good shifts with his line in the offensive zone." - Trent Cull on the play of Danila Klimovich.

"Our d was really good. I thought our checking all over the ice created offence for us. It was great to see Spencer come out with a bagel breakfast." - Trent Cull on the play of his defence and goalie tonight.

"I feel extremely confident out there right now because of the way our defence is supporting me. They are limiting chances and our penalty kill is playing great right now." - Spencer Martin on his first shutout with the Abby Canucks.

"All three of us (goalies) want to be in there and get as much playing time as we can. But at the end of the day, we are all on the same team and pulling in the same direction. We all need to be playing well for this team to be successful." - Martin on taking advantage of his recent opportunities in net. 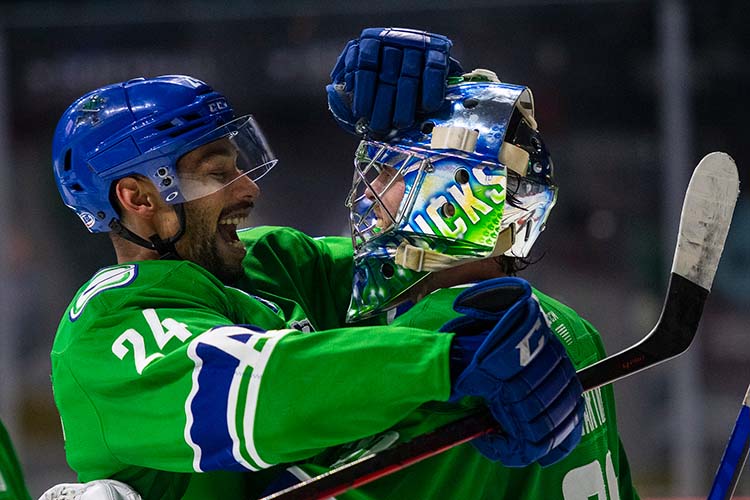 Devante Stephens celebrates with Spencer Martin after the netminder records a shutout on Wednesday night in San Diego.

Next up for the Abbotsford Canucks (9-8-2-1) is their first game in franchise history in Henderson against the Silver Knights (11-7-1-1) on Saturday, December 18th. Puck drop is scheduled for 4:00 pm from the Orleans Arena in Henderson, NV. The Canucks will enter play in fourth place in the Pacific Division with 21 points and Henderson sits third in the division with 24 points.