The Barracuda jumped ahead early, scoring the game’s opening goal at the 3:37 mark in the first period. Nick Cicek found the back of the net with Joel Kellman and Joachim Blichfeld registering the helpers.

Shortly thereafter, Vincent Arseneau tied the game for the Canucks lead when he buried a juicy rebound in front of the net. Phil Di Giuseppe and Sheldon Dries had the assists on the play.

Scott Reedy gave the home side the lead heading into the second period after scoring at the 11:55 mark to give the Barracuda a 2-1 lead. Ryan Merkley and Jayden Halbgewachs had the assists on the powerplay goal.

Justin Bailey tipped a Cameron Schilling point shot past Alexei Melnichuk 45 seconds into the second period to tie the game at 2 for the Canucks. Bailey has now scored in consecutive games.

Sasha Chmelevski once again gave the Barracuda the lead, scoring at the 6:54 mark of the second period to make it a 3-2 game. Evan Weinger doubled San Jose’s lead 61 second later, making it a 4-2 game. Weinger’s shorthanded goal chased Mikey DiPietro from the game, as he was replaced by Arturs Silovs.

Jayden Halbgewachs added the insurance marker with just under five minutes to play in the third period, making it a 5-2 game. Scott Reedy and Evander Kane (yes, that Evander Kane) had the assists on the goal. San Jose was highly effective on the man advantage as Halbgewachs’ goal was the club’s third powerplay goal of the contest.

5-2 is how this game ended as the Canucks were unable to muster any sort of a comeback during the final 40 minutes today. 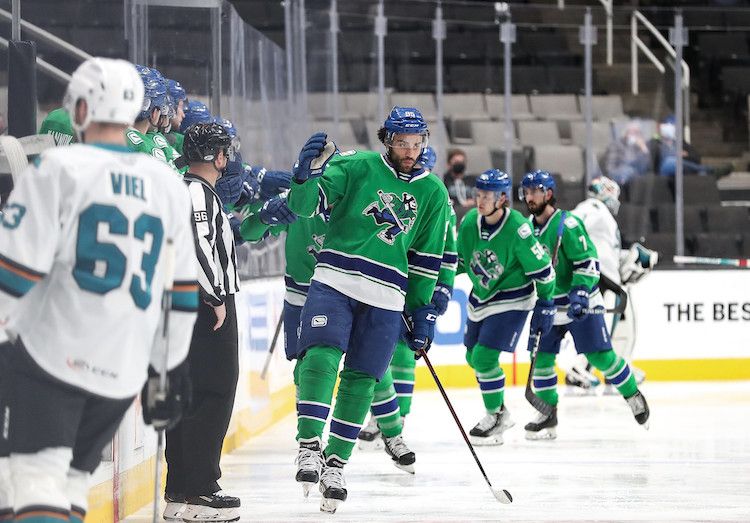 Justin Bailey celebrates his fifth goal of the season during Sunday's game.

Next up for the Abbotsford Canucks (8-8-2-1) is their first game in franchise history against the San Diego Gulls (9-9-1-0) on Wednesday, December 15th. Puck drop is scheduled for 7:00 pm from Pachango Arena in San Diego. The Canucks will enter play in seventh place in the Pacific Division with 19 points and San Diego sits sixth in the division with 19 points.