The Abbotsford Canucks were devoured by the Bakersfield Condors, losing 6-2 on Thursday night at Abbotsford Centre. The game was tight in the early going but Bakersfield pulled away midway through the contest and never looked back.

Bakersfield broke through first in the second frame, getting on the board thanks to a shorthanded goal at the 6:09 mark. Phillip Kemp snuck a puck past Mikey DiPietro following a two-on-one situation to give the Condors a 1-0 lead.

Madison Bowey tied the game 1 just over two minutes later in the second period after he lasered a wrist shot past Stuart Skinner in net for his second goal of the season. Sheldon Rempal and John Stevens had the assists on the play.

The Condors regained the lead at the 14:44 mark of the second period when Devin Brosseau found the back of the net. Esposito registered his second helper of the night on the play.

Seth Griffith extended the Condors’ lead just before the buzzer rang in the second period. Griffith and Cooper Moody broke into the Canucks’ zone on a two-on-one and found a way to slap the puck past a sprawled-out Mikey DiPietro.

Bakersfield held a commanding 3-1 lead through the first 40 minutes and outshot the Canucks 21-14 during the first two periods.

The Condors took off in the third, scoring three unanswered goals in the first nine minutes to make it a 6-1 game. Sheldon Rempal scored late for the home side but that was as close as Abby got tonight.

Tonight’s game had a noticeable edge to it. Both teams brought intensity, but Abbotsford was the clear aggressor in this one. Vincent Arseaneau, Jett Woo and Noah Juulsen all had big hits tonight. These teams play each other three of the next four nights, so don’t be surprised if you see some rough stuff during those games.

The Canucks held their own during the first half of the game, keeping the score close and showing great grit to remain competitive. However, the long break between games appeared to catch up to them during the final 30 minutes as they appeared to lose their legs and Bakersfield took over.

“I thought it took us a little while to get going in the first period, but I thought we actually had some good moments in the second. We were starting to come on. Unfortunately, we kind of made some bad decisions and that happens with rusty players. Our poor decisions hurt us.” – Head Coach, Trent Cull.

“Hopefully we will be better and sharper in tomorrow’s game. We weren’t heavy on our sticks tonight or hard on faceoffs tonight. There is a lot of room for improvement. Hopefully we can get through tomorrow without fatiguing and get ourselves back in a better game mode.” – Head Coach, Trent Cull.

“We knew going into tonight’s game that we were going to be a little depleted with our roster, but I think in this league that is not an excuse for poor play. For us, we know we are a better team than we showed tonight and we have to put this one behind us before tomorrow’s game.” -- Defenceman, Madison Bowey. 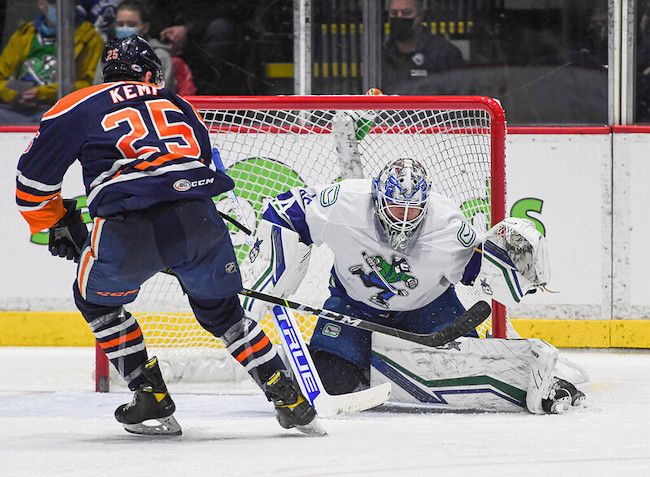 Mikey DiPietro makes a save during the first period of Thursday's game at Abbotsford centre.

The Abbotsford Canucks (10-10-2-1) and Bakersfield Condors (9-8-3-3) will be back in action same time and same place tomorrow night for the second of their four game series. Puck drop is scheduled for 7pm from Abbotsford Centre on Friday night. The Canucks enter tomorrow’s game with 23 points and in seventh place in the Pacific Division. The Condors sit in fifth place in the Pacific with 24 points.