Lockwood banged home a Sheldon Dries rebound past Henderson goalie Logan Thompson at the 1:54 mark of the extra frame to lift the Canucks to their second win this week, and fourth in the last five games.

Spencer Martin, who entered the game with a shutout streak of 92:28, stopped 29 of 31 shots for his fifth consecutive win of the season. Martin improved his record to 5-0-1-1 this season.

The Canucks goaltender continued his strong play into the first period, stopping all shots he faced as Abbotsford was outshot 11-6 by the Silver Knights.

After Henderson’s Mason Primeau was called for a holding penalty four minutes into the middle frame, Justin Bailey capitalized for his sixth goal of the year to give Abbotsford a 1-0 lead. The goal marked the ninth consecutive game the Canucks have scored a goal on the man-advantage.

Abbotsford nearly doubled their lead at the 13:30 mark of the second, with Lockwood streaking towards the net and tipping one past the goaltender Thompson. The goal, however, was immediately waved off for a high-stick to keep the Canucks lead to one goal through 40 minutes.

Shortly after a Devante Stephens hooking penalty at the 3:04 mark of the third, the Silver Knights knotted things up at 1-1 from a Jack Dugan powerplay marker. The goal capped Martin’s shutout streak at 135:44 – a feat spanning over three games.

Henderson’s lead wouldn’t last long, however, as Bailey went backhand-forehand on a breakaway for his second of the game to restore the Canucks’ lead at 2-1.

A cross-checking penalty with five minutes left put the Canucks back shorthanded. Soon after, a Daniil Miromanov wrist shot from the point was tipped by Jake Leschyshyn to tie the game up at two goals apiece.

Despite a late Silver Knights penalty in the third that gave the Canucks a powerplay, things headed to overtime knotted up.

Despite the man advantage through the opening minute and a half in the overtime frame, Abbotsford was unable to capitalize. The Canucks maintained pressure following the powerplay, though, as Lockwood fed Dries on a one-timer before the former capitalized on a rebound to secure the Canucks win.

“I want to make an impact on a nightly basis with my speed. I was a bit frustrated with my game over the last couple weeks, but it’s nice to help the team by contributing on the scoresheet as of late.” – Forward Justin Bailey on contributing two goals Saturday and four goals over the last four games.

“Can’t say enough about Spencer Martin. He’s done an excellent job to stay ready throughout the season, regardless of when he’s been playing or not. When he comes in he’s stealing games for us, and we’ve been playing well in front of him, too.” – Bailey on goaltender Spencer Martin.

“We only had five defencemen tonight, but they really held their own. It was a gutsy effort by them tonight and we made sure after the game to give them an extra stick tap for their efforts.” – Bailey on the Canucks playing the entirety of the game with five defencemen.

“The team has been peaking at a time when I have been getting opportunities in net. We have a great trio of goaltenders here, and as long as the team is winning everyone is happy.” – Goaltender Spencer Martin on

“Justin Bailey lead the way offensively for us tonight. He’s big, he’s fast, and I can’t believe he’s not in the NHL. We love having him here, he’s a big part of our team.” Martin on Bailey’s two-goal performance Saturday. 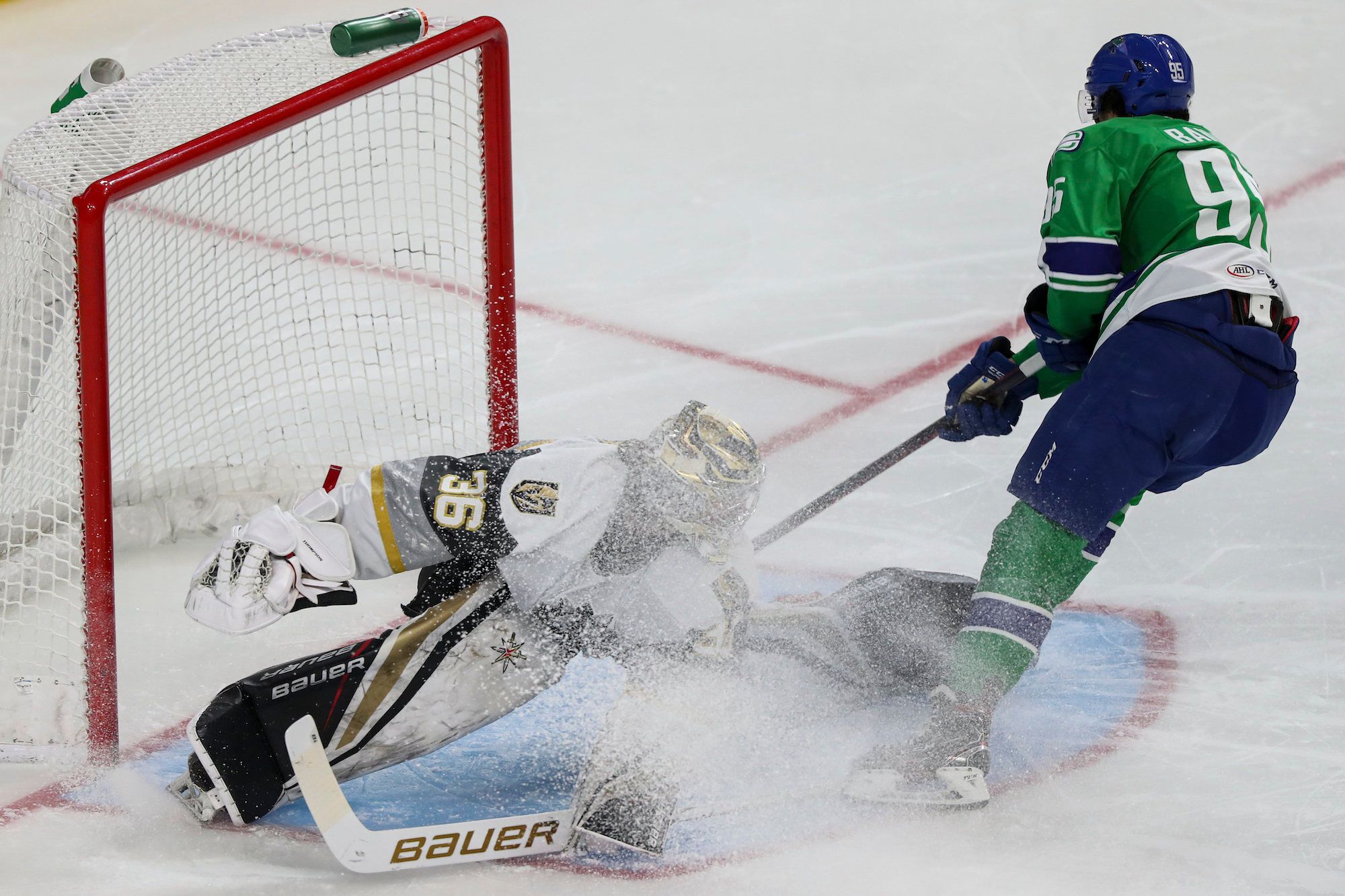 Justin Bailey scores his second of the game on a breakaway, pushing the puck past Silver Knights goaltender Logan Thompson.

The Abbotsford Canucks (10-8-2-1) will look for the season sweep over Henderson Sunday evening, as they once again take on the Silver Knights (11-7-2-1) at Orleans Arena. Puck drop is scheduled for 4:00pm, as the Canucks will enter the game in fourth place in the Pacific Division with 23 points, while Henderson sits third with 25 points.