Abby Earns Point but Falls to Condors in OT 4-3

Abbotsford, BC - The Abbotsford Canucks (10-10-3-1) earned a hard-fought point tonight but lost in heartbreaking fashion to the Bakersfield Condors (10-8-3-3) in the extra frame. The Condors edged Abby by a score of 4-3. The Canucks held a 3-1 lead with just one minute to play in regulation but were unable to hold on.

The Canucks jumped out to an early lead, scoring at the 1:15 mark of the first period while Bakersfield had a man advantage. John Stevens and Justin Bailey broke into the Condors zone on a two-on-one and Stevens found the back of the net following a perfect feed from Bailey. The shorthanded goal was Stevens’ fourth goal of the season and gave the home side a quick 1-0 lead.

Two of Spencer Martin’s eight first period saves came on Condors’ breakaways. The Canucks clamped down defensively and exited the first 20 minutes with a 1-0 lead.

The score remained the same until late in the second period when Raphael Lavoie found the back of the net at the 16:57 mark of the frame. Yanni Kaldis had the helper on the equalizer.

Abbotsford took the lead at the 7:31 mark in the final frame when Justin Bailey netted an unassisted marker to make it 2-1. Noah Juulsen scored his second goal of the season on an empty net at the 18:28 mark of the third period to extend Abby’s lead to 3-1.

The Condors’ comeback began with exactly 60 seconds left to play in the game as Cooper Moody cut the Canucks’ lead in half. James Hamlin came through for Bakersfield with the game-tying goal with three seconds to play in regulation to send this game to overtime.

Both teams had chances to score in the extra frame but ultimately it was the Condors who scored first. Vincent Desharnais ended the game with a goal at the 3:50 mark. Moody and Luke Esposito contributed assists on the play.

The Canucks fought valiantly on Friday night and can walk away with their head held high. Abbotsford was playing tonight with multiple players missing due to injury and illness. The Canucks dressed just 10 forwards and five defencemen. Of those 15 skaters, three have joined the team in the last 48 hours on PTO contracts. There are no excuses in hockey, but getting a point tonight was a moral victory for the depleted Canucks.

“I’m very proud of our group tonight. Our guys played really well. They worked so hard for each other, for us, for me. I understand how fatigued they were and didn’t have much left in the tank late. But the guys really played hard tonight and I appreciated that. Very proud of them for sure.” – Head Coach, Trent Cull.

“Just Bailey was outstanding tonight. I thought he did a really good job and I thought he was sharp all night. He made some great plays and kind of led the charge for our group. I was really happy to see that leadership out of him.” – Head Coach, Trent Cull.

“We knew coming into the game that we were going to short on players. For me, as someone who has been part of this organization all year, I wanted to make sure that John Stevens, Sheldon Rempal and I were setting the tone. Obviously I want to come out and bring that offensive spark every single night, but tonight especially we wanted to make sure we were setting the pace for the rest of the team.” – Forward, Justin Bailey.

“This one stings, not going to lie. I know for all of us, top to bottom, this one sucks. But obviously Spencer Martin played unbelievable for us and everyone battled hard, even the guys who just got here. We got a point out of it and we get to play Bakersfield two more times here and hopefully will find a way to get in the win column.” – Forward, Justin Bailey. 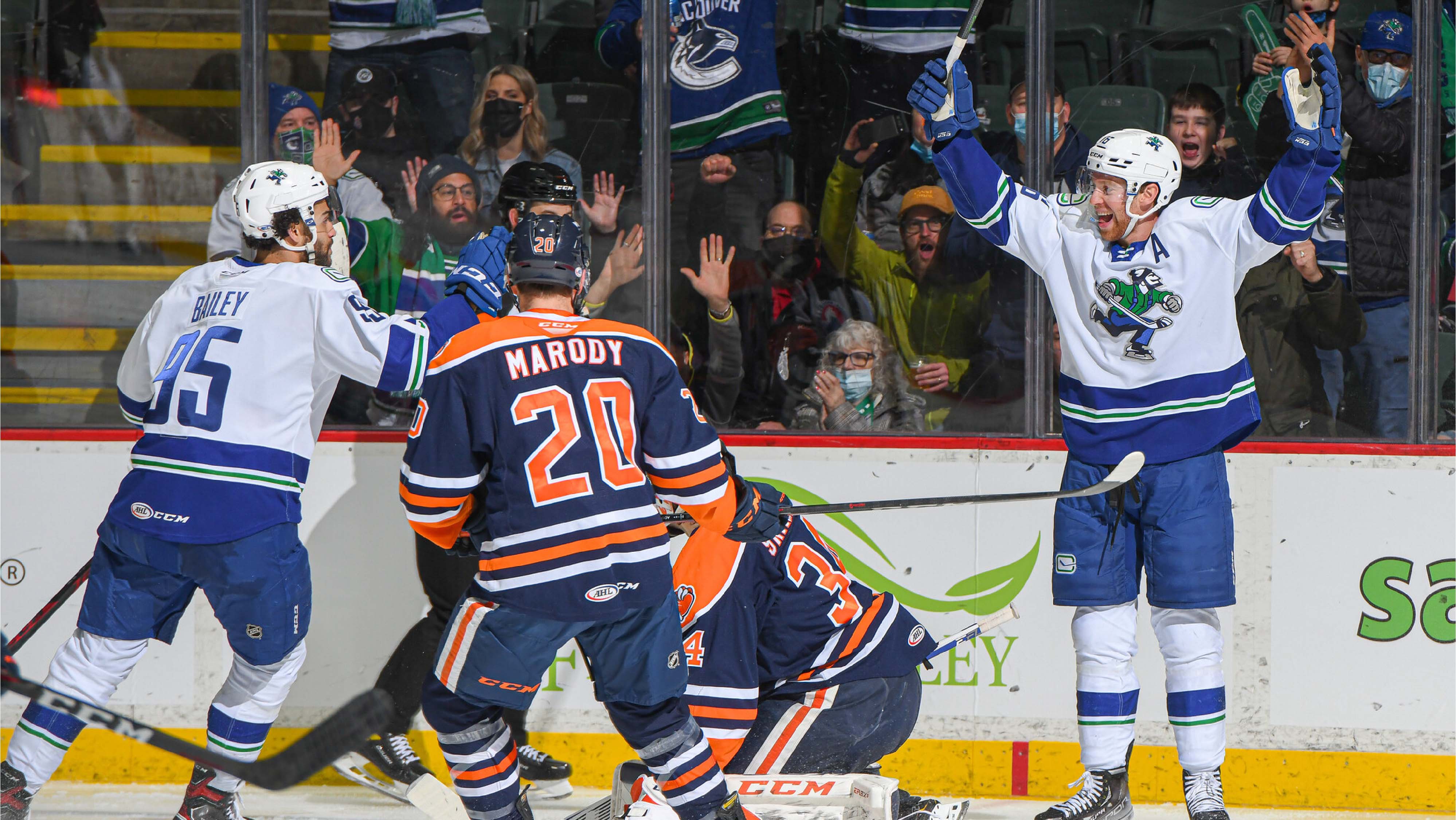 The Abbotsford Canucks (10-10-3-1) will once again play host to the Bakersfield Condors (10-8-3-3) for game three of this four game set on Sunday afternoon at Abbotsford Centre. Puck drop is scheduled for 4pm on Sunday. The Canucks enter play seventh in the Pacific Division with 24 points and Bakersfield is ranked fourth in the Pacific Division with 26 points.