The Canucks jumped all over the Barracuda early in this one, scoring three unanswered goals in the first period. Sheldon Rempal got the party started, wiring a wrist shot that beat Zachary Sawchenko short side to give the visitors a 1-0 lead. Rempal’s sixth goal of the season came on the man advantage.

Just over two minutes later, Vincent Arseneau doubled the Canucks lead when he found twine. Madison Bowey set up the goal with a beautiful long pass and Arseneau did the rest. Following another nice long feed from Rempal, Nic Petan and Phil Di Giuseppe broke in on a two-on-one. Di Giuseppe buried the biscuit following a sweet deke to give the visitors a 3-0 lead going into the second period.

Abby added to their lead 23 seconds into the second frame thanks to an incredible bank pass off the boards by Danila Klimovich which sprung Justin Bailey on a breakaway. Bailey streaked in towards the net, beating Sawchenko with his forehand to make it a 4-0 game for the Canucks.

San Jose got on the board at the 7:32 mark of the second period. Adam Raska poked one past Spencer Matin to make trim the Canucks’ lead.

Tristen Nielsen found the back of the net at the 2:58 mark of the third period to extend the Abby lead to 5-1 that’s how this one ended. The Abby Canucks dominated every aspect of today’s game and the result was never in doubt.

“I thought Nic Petan, Sheldon Rempal and Phil Di Giuseppe were excellent on the top line. They gave us a spark and brought great energy.” – Head Coach, Trent Cull the play of the Canucks' first line today.

“Our guys are really confident and I've liked how we have looked lately with the man advantage.” – Cull speaking on the effectiveness of the powerplay in recent games.

“It was a great pass from Klimo. I knew it was coming off the wall and I just did what I could to get in front of it and score on the breakaway.” – Bailey on the incredible pass by Klimovich to set up Bailey's goal in the second period.

"We have three really good goalies and Spencer (Martin) has done an unbelievable job of staying ready. He has obviously played well in the games he has played and it is fun playing in front of a goalie that's making saves." Bailey on the strong play of Spencer Martin over his past three starts. 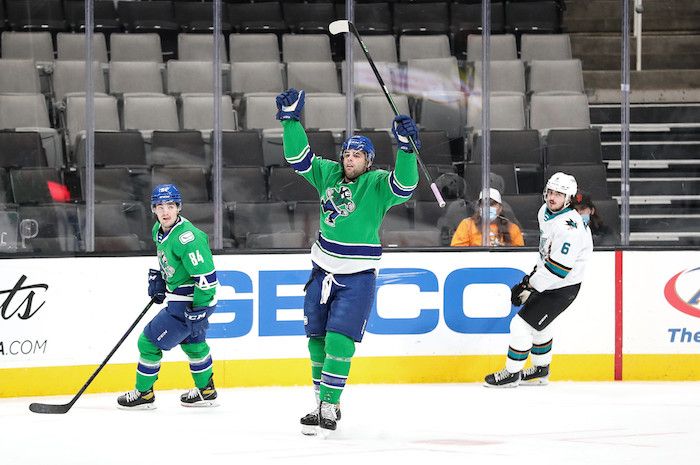 Vinny Arseneau celebrates his goal in the first period to give the Canucks a 2-0 lead.

Next up on the docket for the Abbotsford Canucks (8-7-2-1) will be another date with these same San Jose Barracuda (6-11-1-0) on Sunday, December 13th. Puck drop is scheduled for 3:00 pm from the SAP Center in San Jose. The Canucks will enter play in fifth place in the Pacific Division with 19 points and San Jose sits ninth in the division with 13 points.