San Diego, CA – The Abbotsford Canucks (11-11-3-1) tasted victory for the first time in 2022 tonight, as they defeated the Gulls (10-13-2-0) 5-1 at Pechanga Arena in San Diego. Michael DiPietro earned his fourth victory of the season for the Canucks and Francis Marotte was credited with the defeat for the home side.

The Abby Canucks opened the scoring thanks to their latest arrival, Phil Di Giuseppe. The Toronto, ON product was recently reassigned to Abbotsford from Vancouver and scored his sixth goal of season at the 3:03 mark of the first period. Noah Juulsen and John Stevens had the helpers as the Abby Canucks took a 1-0 lead early on the Gulls.

Abbotsford doubled their margin when John Stevens tickled the twine at the 7:12 mark of the opening frame. Justin Bailey had the assist as Stevens buried a rebound to give the Canucks a 2-0 lead. That is where we sat after the first 20 minutes tonight in San Diego.

Tristen Nielsen added to the Canucks’ lead in the second period when he wristed a shot past Marotte at the 16:39 mark. Devante Stephens set the play up with a nice pass from his own d-zone for the assist.

The Gulls cut into Abby’s lead midway through the final period when Lucas Elvenes found the back of the net at the 9:46 mark. Brent Gates Jr. had the assist on the play for San Diego.

Justin Bailey provided the insurance marker with 3:41 remaining in the third period. Justin Bailey scored on an empty net to give Abby a 4-1 lead.

Danila Klimovich scored for good measure, showing off that electric wrister to give Abby a 5-1 lead at the 18:13 minute mark of the third period.

Michael DiPietro brought his A-game tonight between the pipes for the Canucks. The 22-year-old netminder was on point, turning aside all 17 shots he faced in the first two periods en route to earning his fourth win of the campaign. All told, Mikey had 23 saves on 24 shots tonight.

• Nic Petan and Jack Rathbone both made their return from injury tonight.

• Sheldon Dries, Will Lockwood, Adam Brubacher and Jett Woo made their return from AHL COVID protocol.

• With three points tonight, Johns Stevens now has seven points (3-4-7) over his past seven games.

• Danila Klimovich notched his fourth goal of the season tonight in the third period and his ninth point (4-5-9).

• Mikey DiPietro turned aside 23 of the 24 shots he faced tonight in his fourth win of the season.

• DiPietro’s play was very impressive as his .958 save percentage indicates. 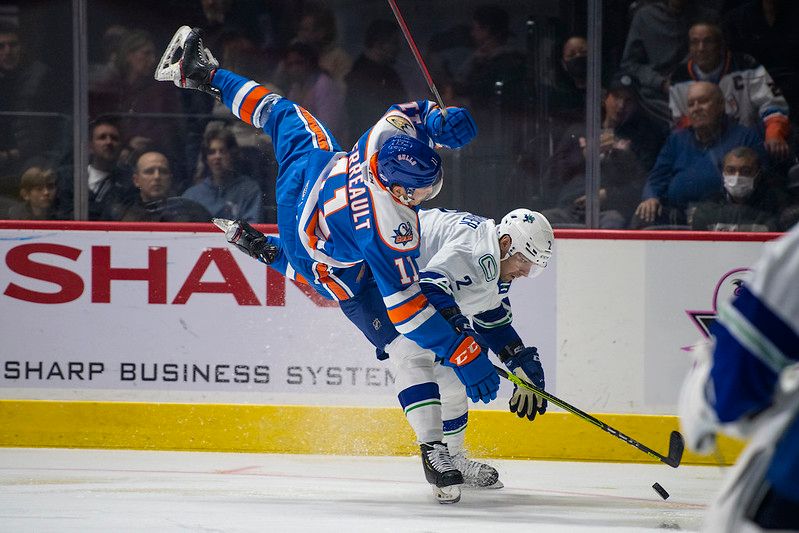 Adam Brubacher delivers a hit on a member of the Gulls in Abby's 5-1 victory in San Diego.

The Abbotsford Canucks (11-11-3-1) will play a rematch against the San Diego Gulls (10-13-2-0) in the finale of their two-game series on Saturday night at Pechanga Arena in San Diego. Puck drop is scheduled for 7pm tomorrow night in San Diego. The Canucks enter play with 26 points and sit in seventh place in the Pacific Division. San Diego is ninth in the Pacific with 22 points.