San Diego, CA – The Abbotsford Canucks (11-12-3-1) came up short in their comeback bid against the Gulls (11-13-2-0) on Saturday night, losing 4-3 at Pechanga Arena in San Diego. Francis Marotte earned the victory for the home side and Arturs Silovs was saddled with the loss for the Canucks.

Neither team cracked the score sheet in the opening 20 minutes. San Diego had nine shots and Abby had eight through the first period. Both teams had their chances, but both goaltenders stood strong in net.

Danny O’Regan lit the lamp first for the Gulls on Saturday night in San Diego at the 6:42 mark of the second period. The goal came on the man advantage with Trevor Carrick and Kodie Curran recording the assists on the play.

The Gulls extended their lead to two goals at the 17:33 mark of the second period when Hunter Drew found the back of the net. Brayden Tracey had the helper as San Diego took a 2-0 lead.

Jack Rathbone cut the Gulls’ lead in half less than two minutes later on the powerplay. The Harvard alum tickled the twine on a one-timer to make it a 2-1 lead. Nic Petan and Justin Bailey registered the assists on the play.

Alex Limoges once again made it a two-goal lead for the Gulls when he scored shorthanded at the 3:38 mark of the third period. Curran recorded his second helper of the game on the play. Carrick added a goal of his own at the 11:48 mark of the final frame to make it a 4-1 game for the Gulls.

Justin Bailey scored late for the Canucks and Phil Di Giuseppe scored in the literal last second, but it was too little too late for the visitors. The home fans were sent home happy following a 4-3 victory.

• Jack Rathbone scored his second goal of the season in his second game back since returning to the Canucks lineup from injury on Saturday night.

• Including his third period assist, Rathbone now has eight points (2-6-8) on the season with Abbotsford.

• Justin Bailey's goal in the third was his 10th of the season and eighth marker in his last 10 games.

• Phil Di Giuseppe's last second goal was his seventh of the season and he has now scored in two consecutive nights.

• The Canucks scored on 40% of their powerplay opportunities tonight (2/5).

• Petan and Bailey tied for the team lead in shots (6) tonight.

• Arturs Silovs turned aside 21 of the 25 shots he faced tonight in the loss. 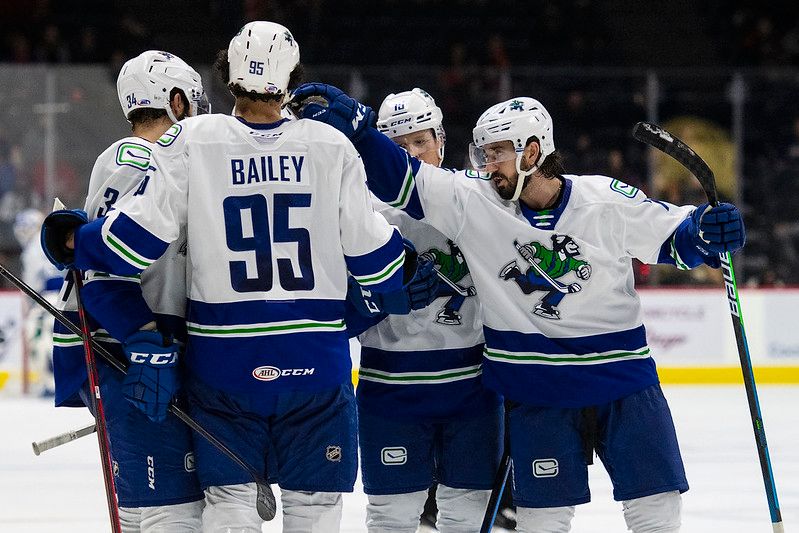 The Canucks celebrate a goal in the second period of tonight's game against the Gulls.

The Abbotsford Canucks (11-12-3-1) will head up the I-5 to battle the Ontario Reign (18-6-3-1) on Monday night. Puck drop is scheduled for 3pm on Martin Luther King Jr. Day at Toyota Arena in Ontario, CA. The Canucks enter play with 26 points and sit in seventh place in the Pacific Division. Ontario is currently second in the Pacific with 40 points.