Las Vegas, NV – Despite playing with just five defencemen for the second consecutive night, the Abbotsford Canucks (10-9-2-1) put up a full 60-minute effort before falling 3-1 to the Henderson Silver Knights (12-7-2-1) Sunday at Orleans Arena.

John Stevens scored the first-ever shorthanded goal in franchise history in the loss, with the Canucks penalty kill going 6-for-7 in the game.

Canucks goaltender Michael DiPietro made 30 saves in the game. It was DiPietro’s team-leading 11th start of the season, as his personal record moves to 3-5-2.

Abbotsford forward Nic Petan picked up his 100th career AHL assist in the loss, as the Delta, B.C. native now sits fourth in team scoring with 15 points (5-10-15) through 14 games.

The Canucks seemingly picked up where they left off from Saturday night’s overtime win, managing five shots through the opening five minutes to keep the Silver Knights on edge. Midway through the first period, Abbotsford fell into penalty trouble with John Stevens and Sheldon Dries taking minor penalties 16 seconds apart.

The Canucks managed a strong first kill, before Stevens stepped out of the box and was sprung on a breakaway with a lead pass from Petan. The 27-year-old Stevens wasted no time with the opportunity, burying the puck on the backhand for his third goal of the season and Abbotsford’s first shorthanded goal in franchise history to make it 1-0.

Seven minutes later, Henderson’s Jonas Rondbjerg knotted things up at 1-1 after knocking Will Lockwood off the puck and firing a wrist shot in the slot past DiPietro with 3:53 left in the frame.

The Silver Knights opened the second period with a 12-1 shot advantage through the first 10 minutes, but DiPietro stood tall to keep the game tied up through 40 minutes.

Henderson took its first lead of the game 1:56 into the third, as Paul Cotter converted on Henderson’s sixth powerplay chance to take a 2-1 lead.

Despite some late opportunities, the Canucks were unable to score the equalizing goal. Henderson’s Ben Jones would score on the empty net with 28 seconds left to close out the game 3-1, as the Silver Knights improved to 5-1-1 over their last seven games.

With the loss, the Abbotsford Canucks’ all-time record against Henderson moved to 3-1-0-0. It was the final game of the regular season the two teams will face against each other. Petan joins Abbotsford defenceman Cameron Schilling (48-166-214) as the only two active skaters on theteam with 100+ American Hockey League assists. It was the second consecutive game Abbotsford played with only five defencemen, after the Vancouver Canucks recalled D Madison Bowey (Dec. 17), D Guillaume Brisebois (Dec. 16) and D Noah Juulsen (Dec. 9). 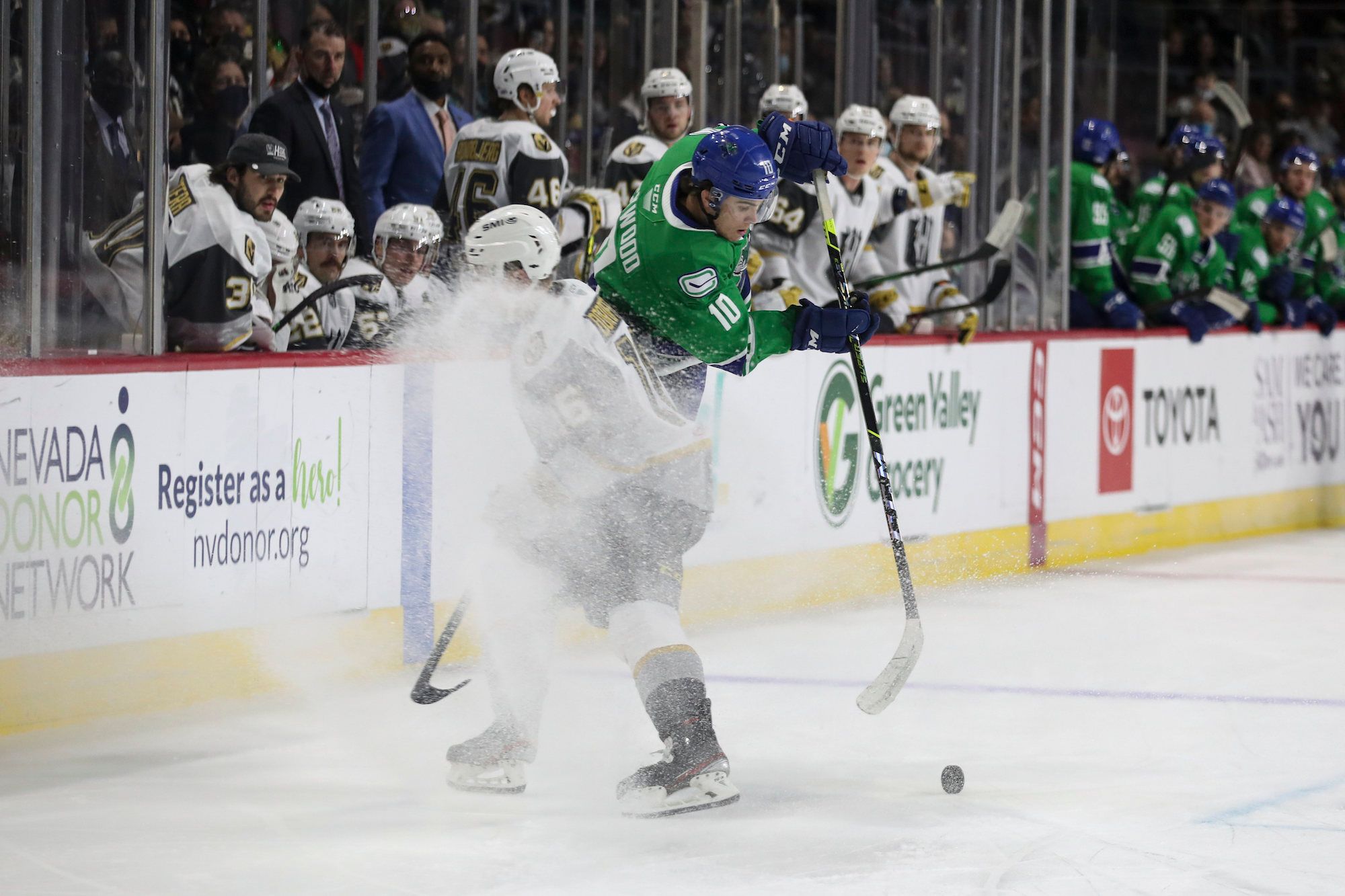 Canucks forward Will Lockwood is hit by a Henderson Silver Knights defenceman in the Canucks' offensive zone.

The Canucks (10-9-2-1) return to Abbotsford for their final home series of the calendar year as they play host to the Tucson Roadrunners (10-9-2-0) Wednesday (7pm) and Thursday (3pm) at Abbotsford Centre. Wednesday’s game will be played in support of the Jumpstart Foundation Abbotsford, while Thursday the Canucks partner with the BC Dairy Association to support the Dairy industry.